There is no easy way to hear “you’ve got a 7cm tumor on your ovary and we have no idea what it is.” Especially when you’re a 32-year-old girl who really wants to have children. Oh, and to live.

This is how 2018 began for me. I felt like I was trapped in a giant emotional washing machine. One minute I was getting splashed with horrifying diagnoses. The next I was drowning in fear. All strength was squeezed out of me. Occasionally small bubbles of hope would form, only to be crushed by what felt like the biggest injustice in the world.

I don’t want to burden you with the details. If you have been through something similar, you already know how it feels. And if you haven’t, I sincerely hope you never do. What I want to focus on is how I managed my fear – because the learning is valid for everyone.

I personified my problem

There was an unidentifiable object inside of me. It did not belong there. It was unwanted. And scary. “You will be called The Alien,” I informed it. It conceded. I asked all my family and friends to refer to it as The Alien. That felt much lighter than the dreaded c-word.

Giving it an identity allowed me to communicate with it. “Alien, I am bigger than you. And soon I am getting rid of you. Mua-ha-ha-ha!” I would proclaim, like a superhero that is about to save the day. Good communication is 2-way. Since I consider myself a good communicator, I thought it polite to ask The Alien a question:

“What message do you have for me?”

The Alien revealed all the things I had known yet had refused to act on. “You are impatient – you have all the time you need. You are indignant – remember life doesn’t owe you anything. A bit of gratitude would help.” I continue to learn from The Alien every day. Whilst unwelcome, it is a powerful teacher.

As I conversed with The Alien, new energy began to surface. Confidence. Empowerment. I realised I hold the power in this relationship. I choose how to see The Alien and how to respond to it. Humour, an unlikely energy also appeared. In the darkest of times, we began to joke about eliminating The Alien. There was even some laughter in between the worry and the tears. Humour made everything more bearable for me and my family.

I sketched my problem

My surgeon had told me he would need to remove my left ovary in order to get The Alien out. I wasn’t about to just give up half of my potential babies, so decided to bargain with him. By sketching out alternative methods of Alien extraction: 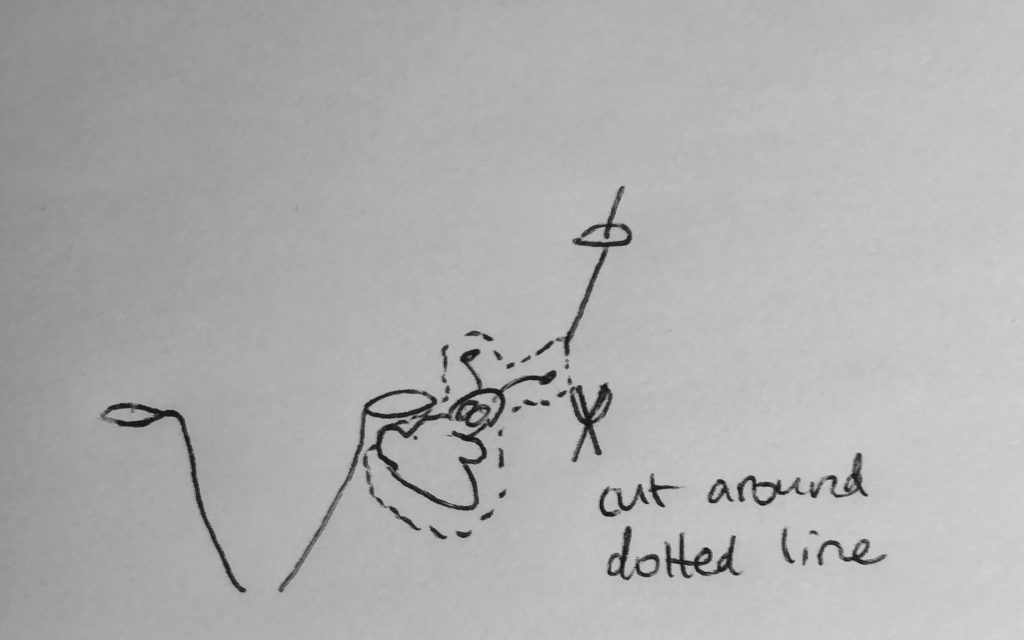 For the untrained art connoisseurs, Sketch 1 = cut The Alien out with scissors; Sketch 2 = suck The Alien out with vacuum cleaner; Sketch 3 = call mothership to come and collect its Alien. All three options leave the ovaries intact.

As we sat in the doctor’s cabinet, he explained his plan for the surgery. I cried. I waited for him to finish because that is what polite people do and I am a polite person. Then I announced enthusiastically “I also have a plan!” I produced the piece of paper with the drawings.

The doctor burst out laughing. “This is brilliant, can I take a photo of it?” We all laughed in what was a highly unusual setting.

Whilst he loved the mothership option most, the surgeon stood by his plan. Partially because he is a surgeon and surgeons like to cut things out. And partially because my sketches were black and white and not colourful. I’ll keep that in mind next time I try to persuade an expert that my unqualified opinion is better than theirs.

After the surgery, the doctor called Mark and said these actual words “The Alien is out!” He continues to call it The Alien until this very day. So do all my doctors, nurses, friends, family, supporters and random people who for some reason end up knowing about it.

The humour didn’t save my ovary and didn’t make the tumour benign. It did, however, save my sanity. It nursed my broken heart. It inspired lightness and positivity in the people around me. That helped to keep my own faith up and to bounce out of the dips more quickly than slowly.

Get unstuck by putting a humorous spin on the situation. You will lighten up even the darkest of cases and you may even have a little fun in the process.

If you can’t move past negativity, let’s have a free sample coaching session. I’ll help you explore other perspectives.